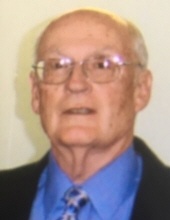 On July 9, 2020 Rev. Larry Eugene Ball left this world to stand before the Lord.  He was born May 12, 1940, in Marion, Ind. to the late Millard and Mary Helen Ball Baker.  After graduating high school, Larry enlisted in the United States Marine Corps for four years followed by eight years of enlistment in the United States Air Force.

After retirement, he received calling into the ministry and became a licensed minister through Anderson University with the First Church of God.  Larry served as Pastor of Maxwell First Church of God in Pounding Mill, Va., and became an ordained minister in 2009 and provided pulpit supply for local churches.  He was a member of Little River United Methodist Church in South Carolina and attended Abingdon United Methodist Church.

In addition to his parents, Larry was also preceded in death by his son, Glenn Ball; half-brother, Kevin Baker; and step-mother, Shirley Ball.

Graveside services will be held at 11:00 a.m. Monday, July 13, 2020, in Mt. Rose Cemetery with Rev. Glenn Patterson officiating.  Military rites will be conducted by Highlands Veterans Honor Guard and the United States Marine Corps.  Honorary pallbearers will be Frankie Fulton, Kyle Easterling, C.D. Kestner, Jack Sturgill, and John LeGard.  Visitation with the family will be held in the mausoleum 10:15-11:00 a.m. just prior to the service.

Those wishing to share memories or messages of sympathy or send “Hugs from Home” may do so online by visiting www.farrisfuneralservice.com. The family of Rev. Larry Eugene Ball is in the care of the Main Street Chapel of Farris Funeral Service, 427 East Main Street, Abingdon, VA 24210 (276-623-2700).
To order memorial trees or send flowers to the family in memory of Rev. Larry Eugene Ball, please visit our flower store.