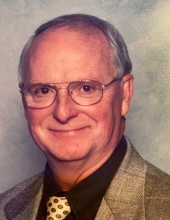 Richard R. Wolters, age 79, of Abingdon, Va., went to be with his Lord and Savior on Wednesday, July 27, 2022, at Johnston Memorial Hospital. He was born February 1, 1943, to Everett Wolters and Marjorie Davies Wolters. In addition to his parents, he is preceded in death by one sibling, Barbara Ann Beaman. He is survived by his wife of 55 years, Ann Watts Wolters; a son, Aaron Brooks Wolters; daughter, Nancy Ann Wolters; daughter, Susan Watts Wolters and husband, Mark Paccione; three granddaughters, Magdalene Hamlin, Katherine Hamlin and Stella Rose Paccione; one sister, Beverly Simpson and husband, Claude Simpson; along with many nieces and nephews.

Richard was a graduate of East Carolina University, and attended William & Mary College for his Masters in Education Administration. He taught elementary and middle school and was an elementary school principal in Southampton County, Va. He was also assistant football coach and girls basketball coach at Windsor High School in Windsor, Va. After leaving education, he farmed for twenty years – something he had always wanted to do. He then became what he liked to call a bureaucrat, working for the US Department of Agriculture in the Farm Service Agency.

Richard was twice president of both the Isle of Wight Ruritan Club and the Abingdon Civitan Club. He was on the Board of Directors for Surry County Academy and the Farmer’s Cooperative in Surry County, Va. He enjoyed playing golf, fishing, reading, working crossword puzzles, and having breakfast with his buddies at Chick-N-Little Restaurant. But most of all he enjoyed his family, and was so proud of his children and grandchildren.

The family would like to express a special thanks to the caregivers at Ballad Hospice, and Johnston Memorial Hospital for their prayers, love and kindness during this difficult time.

To order memorial trees or send flowers to the family in memory of Richard R. Wolters, please visit our flower store.