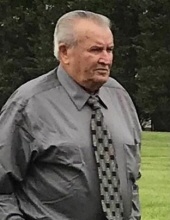 Robbie Willis Jones, 86, of Mulberry, Florida went to be with the Lord on September 4, 2021. He was born on February 17, 1935, in Cadwell, Georgia to the late Morgan Bertis Jones and Maggie Baggett Jones. Robbie was called into the ministry in 1970 and pastored several churches during his ministry.  Robbie was a kind and considerate man who loved God and his family.   He loved the Lord and had a passion for sharing the Word of God with all he met.

Robbie was of the Free Will Baptist faith and attended Bethany Free Will Baptist Church in Lakeland, Florida.   Robbie enjoyed playing the guitar and singing gospel songs and enjoyed fishing and spending time with this family.  Robbie also enjoyed repairing lawn equipment and attending yard sales.  He made himself available to his family and friends for any home, vehicle, or other needed repairs.   You could oftentimes find him assisting his sons with floor covering work.

A memorial Service will be held on Sunday, September 26, at 11:00 a.m. at the Bethany Free Will Baptist Church in Lakeland Florida as well as Sunday, October 17, at 12:00 noon at the Valley View Cemetery in Abingdon, Virginia, where he will be joined with his wife of 65 years.

This obituary is a courtesy announcement of Farris Funeral Service.
To order memorial trees or send flowers to the family in memory of Robbie Willis Jones, please visit our flower store.