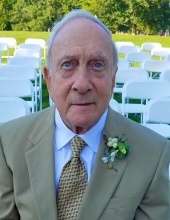 Robert Horsch, son of Augustus and Nellie Finn Horsch, passed away peacefully on April 19, 2022. Bob was a gracious and loving husband, father, grandfather, great papa, and friend to all who knew him. He will be remembered for his sense of humor, his compassion, his humanitarianism, and his ability to pull off a good practical joke. He gave with open hands and an open heart and without need for recognition.

Bob was born in Medford, Mass. and spent his childhood in South Weymouth, Mass., and one of his greatest childhood memories was seeing the Hindenburg fly over. He joined the U.S. Army at the age of 17, serving at Ft. Dix in New Jersey for two years and finishing high school before his discharge in 1948. He graduated from Theil College, Greenville, Penn., in 1952 where he met his wife of 58 years, Joan. He worked for Park Davis as a pharmaceutical Rep where he received and distributed the first polio vaccines in Pennsylvania. He graduated from the University of Pittsburgh Medical School in 1959 and completed his residency at Hammett Medical Center in Erie, Penn. He moved his family of four children to Westfield, N.Y. in 1960, where he practiced family medicine for 18 years. He moved to Abingdon, Va. in 1978 and practiced at the Russell County Medical Center until his retirement in 1995.

During his time in practice, he delivered thousands of babies, performed countless surgeries and received numerous honors including recognition by Paul Harvey and Contemporary Surgery Magazine for being the first physician to use a laparoscope to diagnose appendicitis. He was a civilian volunteer physician to Vietnam during the conflict and represented the Westfield, N.Y. Rotary Club as a volunteer physician in Bolivia. While traveling around the world, he was the guest speaker at the Rotary Club of Bangkok, Thailand. He valued education as illustrated through his provision of education for his children, grandchildren, great grandchildren and other relatives and friends.

Bob was a devoted and passionate member of the Virginia Creeper Trail Club and served on the board of directors until his death. He was a member of the Lunch Bunch group of retired men that met weekly with no purpose except to eat and converse. He was a founding member of Eagle Ridge Ski Resort, which later became part of the Kissing Bridge Group of resorts.

Left to cherish his memory are his children: Mary Beth Pierce (Danny) of Columbus, Ohio; and their children, Nathan, Ashley and Luke; Amy Smith (Dan) of Abingdon, Va.; and their children, Alex and Evan; Susan Molzan of Houston, Texas; and her children, Sophie and Sarah; and Thomas Horsch, of Abingdon, Va. Judy Horsch Baxter, his only remaining sibling, resides in Florida. He took great pride in his five great-grandchildren who brought him much joy as he aged.

Guests are encouraged to share their memories and express words of condolence and sympathy by visiting www.farrisfuneralservice.com and signing the online guestbook. The family of Robert Franklin Horsch, MD is being cared for by Farris Cremation and Funeral Center, 19415 Lee Hwy., Abingdon, Va. 24210 (276-623-2700).

To order memorial trees or send flowers to the family in memory of Robert Franklin Horsch, MD, please visit our flower store.