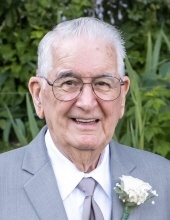 Robert Lee Mutter, Sr., 84, passed away on Sunday, August 7, 2022, at Bristol Regional Medical Center. Mr. Mutter was born in Elk Garden, Va.; however, he had lived in Abingdon for a number of years. He retired from Appalachian Power Company after 32 years of service in power department maintenance. Mr. Mutter was an 8-year veteran of the United States Air Force and he served in Vietnam. He was of the Church of Christ faith.

Services will be private.

Those wishing to share memories and express sympathy may do so online by visiting www.farrisfuneralservice.com
The Main Street Chapel of Farris Funeral Service, 427 East Main Street, Abingdon, VA is serving the family of Robert Lee Mutter, Sr.(276) 623-2700.

To order memorial trees or send flowers to the family in memory of Robert Lee Mutter, Sr., please visit our flower store.