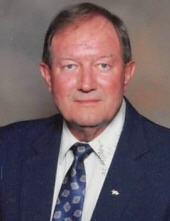 Abingdon, Va. - Robert R. "Bob" Baumbach went on to be with the Lord on Friday, October 23, 2020, at the Abingdon Health and Rehab Center.

He was born in Rubidoux, California, July 11, 1936, to the late John Joseph and Dora Mary Baumbach.

Bob grew up in the greater Riverside, California area and eventually joined the United States Army. He began work at Alumax Aluminum in Riverside, where he swept floors, only to retire with the company as General Branch Manager of the entire Western States. During the course of his employment, he and his family lived in six different states and Mexico. The family made regular visits to Abingdon, Va. to visit his mother-in-law, Elizabeth Maucotel. Upon retirement in 1993, it was only natural to move to Abingdon, Va.

Bob enjoyed camping, boating, and taking the RV to NASCAR races, as well as Florida dring the winter months. He became active here in Abingdon as a Shriner, becoming the President in 1996. It brought him much joy to drive the kids to the hospital and to drive his miniature truck in the Shriner Parade.

It was Bob's wish to have a private ceremony.