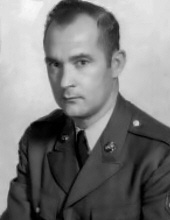 Ronald Franklin Brittenham was born April 16, 1931, in Rocky Gap, Bland County, Virginia to Andy Frank Brittenham and Ina French Brittenham.  He passed away peacefully, surrounded by his family. On July 8, 2021, he reunited with the true love of his life, Margaret “Kitty” Brittenham.

As a young man, he enjoyed many adventures, including working as a set carpenter at Barter Theatre in Abingdon, Va. and traveling by train all over the United States with the company. Over the years, he recounted many tales of Hollywood greats that he had worked with at the Barter. He chose a career with the United States Army as a military police officer and served 22 years before retiring. His motto was always, “Keep moving”. Working was one of the many ways he kept busy. He worked many years at Tubb’s Hardware where he was affectionately known as “Mr. Sales”. During his years of retirement, he enjoyed many hobbies such as knife making, crossword puzzles, reading, hunting, fishing, and football. For several years he enjoyed farming in Southwestern Virginia.

He is survived by five daughters that love him dearly, Donna J. Green Pritchard and husband, David, Sandy Brittenham, Rena Brittenham, Stacey Rigsby, and Leslie Speakes; seven grandchildren (that during his final days he talked about how very proud he was to have), Bradley, Andrew, Trystan, Joshua, Vivyan, Erin and Emma; a very special niece, Anne Rouse; sisters, Betty Ann Urbani and Charlene Tollie; sister-in-law, Linda Brittenham; and numerous nieces and nephews.

A graveside service will be held on Saturday, July 17, 2021, at 1:00 p.m. at Forest Hills Memory Gardens with Minister Bill Haywood officiating.  Military honors will be provided by the Army National Guard and the Highlands Veterans Honor Guard.  Visitation will be held on Friday, July 16th from 6:00 p.m.-8:00 p.m. at the Main Street Chapel of Farris Funeral Service.

The family suggests any donations may be made to the St. Jude Children’s Research Hospital, 501 St. Jude Place, Memphis, TN 38105.

Those wishing to express sympathy online may do so by visiting www.farrisfuneralservice.com and signing the online guestbook.  The family of Ronald Franklin Brittenham is being cared for by Farris Funeral Service and Crematory, 427 E. Main St., Abingdon, Va. 24210 (276-623-2700).
To order memorial trees or send flowers to the family in memory of Ronald Franklin Brittenham, please visit our flower store.