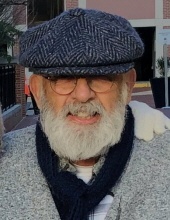 Born in the village of Bourj el-Moulouk in the Marjeyoun region of Lebanon, Samir came to the United States in 1956 to attend Tulane University, where he earned his BA, MA and PhD in political science.

In 1964, he began a long and productive career as a professor of political science and international relations at Emory & Henry College. At the time of his retirement, he held the distinction as the longest full-time faculty member in the history of the College. During his time at Emory, he also served as Academic Dean. Dr. Saliba designed an innovative interdisciplinary curriculum, was advisor to the pre-law students and organized and led several international initiatives. He took special interest in bringing foreign students to Emory and making sure they were adapting and succeeding in their new environment.

Samir was an excellent cook and took great joy and delight in preparing traditional Lebanese food, sometimes on a large scale for college events, and always the teacher, never hesitated to share his recipes with others. He loved southwest Virginia because it reminded him of his childhood home in the mountains of Lebanon and he spent many happy hours in his garden and yard, raising delicious fruits and vegetables and sharing them widely. He was also an avid tennis player and in his youth played on the Lebanese basketball team in the Pan-Arab games. He had a warm and humorous personality and looked for the best in everyone he met. Even in his last days he maintained a keen interest in the affairs of the world and offered his observations on American and international politics to the end.

Of all his accomplishments, he was most proud of his children and later, his grandchildren, who knew him as "Jiddo."

A celebration of her life will be held on July 24, 2021 at 10:00 A.M. in the Memorial Chapel on the Emory & Henry College Campus with the Rev. David St.Clair officiating. A reception will follow the service in the Van Dyke Board of Visitors Lounge.

The family suggests that Samir's life be memorialized with donations to the Samir N. Saliba Scholarship at Emory & Henry College. Memorial gifts may be made online at www.ehc.edu/give or mailed to Office of Advancement, Emory & Henry College, P.O. Box 950, Emory, VA 24327.
To order memorial trees or send flowers to the family in memory of Samir Nicolas Saliba, please visit our flower store.

Van Dyke Board of Visitors Lounge