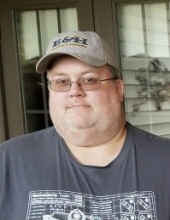 Scott Carson Henderson, age 49, of Glade Spring, Va., passed away on Wednesday, November 24, 2021, at Bristol Regional Medical Center.  He was born September 11, 1972, to the late Van Patton Henderson and Bonnie McClanahan Henderson.  He was currently employed by Agero.

In addition to his parents, Scott is also preceded in death by his sister, Patricia Henderson Pafford and husband, Cecil.

A graveside service will be held on Monday, November 29, 2021, at 2:00 p.m. at Rush Creek Cemetery with Elder Howard Davis officiating.  Honorary pallbearers will be Eddie Davis, Scott Verzi, and Chris Lockard who were Scott’s close friends.

In lieu of flowers, memorial contributons may be made to Rush Creek Cemetery, 31331 Wright Rd., Damascus, Va. 24236, c/o Mary Widener.

Those wishing to express sympathy online may do so by visiting www.farrisfuneralservice.com and signing the online guestbook.  The family of Scott Carson Henderson is being cared for by Farris Funeral Service and Crematory, 427 E. Main St., Abingdon, Va. 24210.
To order memorial trees or send flowers to the family in memory of Scott Carson Henderson, please visit our flower store.