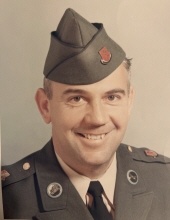 SFC Fred Jackson Hall, (Ret), of Abingdon, Va., went home to be with the Lord on Thursday, February 24, 2022, after a lengthy illness.

Fred was born in Hickory, NC on June 18, 1930, to the late Edward “Dock” and Mary Reed Hall. He grew up in Thomasville, NC. Fred joined the U.S. Army and retired after 20 years as Sergeant First Class. During his military career, he did three tours stationed in Japan, Korea, and Berlin. After his military service, he founded the welding program at SWVA Community College. He worked as a welder and safety instructor at Island Creek Coal Company and the Army Corps of Engineers in Saudi Arabia. He spent the last remaining working years as a life insurance salesman for numerous organizations. He was a lifelong 32nd Degree Mason of Lodge 395 in Wilmington, NC, a member of the VFW and the American Legion. Fred was an avid reader, golfer, gardener, and especially enjoyed many years wintering in Florida with Hazel.

He is preceded in death by his parents; and his siblings Bobby Hall, Patty Johnson, Mary Foster; and a granddaughter Julia Marie Hall.

Funeral services will be held at 3:00PM on Sunday, February 27, 2022, at the Main Street Chapel of Farris Funeral Service Chapel with Pastor Stan Hill officiating. A committal service will follow in Forest Hills Memorial Gardens with full military honors rendered by the Highlands Honor Guard and the VA National Guard. The family will receive friends from 1:30-3:00PM prior to the services on Sunday at the funeral home.

In lieu of flowers donations can be made the American Alzheimer’s Association. Those wishing to express sympathy online may do so by visiting www.farrisfuneralservice.com and signing the online guestbook. The family of SFC Fred J. Hall, (Ret) is being served by Farris Funeral Service & Crematory, 427 E. Main St., Abingdon, Va. 24210, (276) 623-2700.

To order memorial trees or send flowers to the family in memory of SFC Fred Jackson Hall, please visit our flower store.