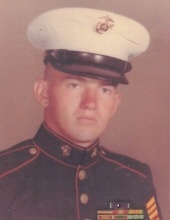 SGT Samuel Patrick Leonard USMC-R, age 77, of Saltville, Va., answered the call of his Commander-In-Chief, Jesus Christ, Commander of the hosts of heaven and reported to his new duty station onTuesday, July 26, 2022.

He was born September 5, 1944, in Castlewood, Va., a son of the late Charlie and Blanche Leonard.

In addition to his parents, he was also preceded in death by his sister, Mary Ann Bolling; and three brothers: Charlie Leonard, Jr.; Larry Leonard; and Raymond Leonard.

He will be greatly missed.
To order memorial trees or send flowers to the family in memory of SGT Samuel Patrick Leonard USMC-R, please visit our flower store.