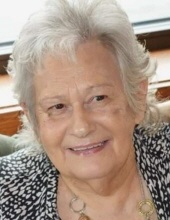 In Addition to her parents, Shirley is preceded in death by her husband, Joseph A. Stewart; sister Claudette Snyder; and brother, Wayne Goff.

Shirley graduated from Glade Spring High School in 1957. After high school she spent several years with the F.B.I. in Washington D.C. She slowly migrated back home over several years, living in several different places throughout Virgina, with her family. She wore many hats in her 81 years, but the one she loved the most was Mother, Aunt, and Grandmother. She was very artistic and enjoyed crafts and ceramics that led to working craft shows with her brother Wilbur and his wife Jeannie. She enjoyed her time working with the Patrick Henry High School Choir Boosters in the late 80's. After Joe's passing in 1995, Shirley took a position at Bristol Compressors, and retired in 2008. Once she settled back to her hometown in Glade, she enjoyed taking care of her furry kids Cordy, Zoey, Willow and Buffy. Shirley enjoyed her family; she was always ready to play a game of Gin rummy. Anyone lucky enough to walk in for a visit when she was making potato pancakes enjoyed a taste that will now forever be a longing, for nobody can sprinkle the exact amount of love Shirley added to each batch.

Funeral services will be held at 2:00 p.m. Wednesday, February 19th, 2020, in the Main Street Chapel of Farris Funeral Service with Rev. Barbara Farmer officiating. There will be no visitation prior to the service. It was Mrs. Stewart's wish to be cremated after the service.

In lieu of flowers, memorial contributions can be made to the Smyth County Animal Shelter, 287 Fox Valley Road, Marion VA 24354 in Mrs. Stewart's name. The place where she first met her companion Cordy.