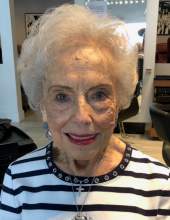 Thelma Miller Mock was born in Washington County, Va. on February 12, 1925. She peacefully passed from this world and into the arms of Jesus on February 8, 2022. The daughter of the late Dewey and Anna Miller; widow of Albert T. Mock; and sister of the late, Horace Miller. She spent much of her life in Hollywood, Fla., moving back to Virginia in 1992. She graduated Valedictorian from Greendale High School, Abingdon, Va. and later graduated from Bristol Commercial College. Retired from Dade County Public School System, Miami, Fla. She attended Gold Coast School of Real Estate in Ft. Lauderdale, Fla. and became a licensed salesperson. Upon returning to Bristol, Va. in 1992, she became employed part-time by Jane L. Sheffey & Associates from 1994-1996. Former member of Sheridan Hills Baptist Church, Hollywood, Fla, Abundant Living Ministries, Ft. Lauderdale, Fla. and a faithful member of First Assembly of God, Bristol, Va. where she volunteered countless hours. Also, volunteering for Wellmont Hospice, Bristol, Va. She has spent the last five years in the home of her beloved son, Randy, and his wife, Debbie, in Deerfield Beach, Fla. enjoying the beautiful, warm Florida sun and year-round good weather.

A memorial service will be held on Saturday, March 12, 2022, at 2:00 p.m. in the Main Street Chapel of Farris Funeral Service with the Rev. Jeffrey L. Carico officiating. Visitation will be held on Saturday from 1:00 p.m. – 2:00 p.m. at the funeral home.
To order memorial trees or send flowers to the family in memory of Thelma Miller Mock, please visit our flower store.