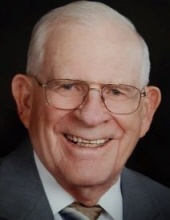 V.T. was born April 8, 1925, to the late Valentine Carr and Lula King Carr in Floyd County, Va.  He was a Veteran, serving during World War II in the 567th Anti-Aircraft Artillery Battalion in Europe.  Having been promoted to Records Supervisor by Appalachian Power Company, V.T. and his family moved to Abingdon in 1969 where he worked until his retirement.  V.T. was a faithful member of the Abingdon United Methodist Church.

A funeral ceremony will be held on Tuesday, March 10, 2020, at 1:00 p.m. at Abingdon United Methodist Church, 101 East Main St., Abingdon, VA 24210, with the Rev. Dr. Robert Countiss officiating. A committal service will follow at the Serenity Garden Mausoleum of Forest Hills Memory Gardens where military honors will be rendered by the Virginia National Guard.  Visitation will be held on Tuesday, March 10, 2020, from 12:00 p.m.-1:00 p.m. at the church.

Those wishing to express sympathy online may do so by visiting www.farrisfuneralservice.com and signing the online guestbook.  The family of Valentine “V.T.” Carr is being cared for by Farris Funeral Service and Crematory, 427 E. Main St., Abingdon, VA 24210 (276-623-2700).
To order memorial trees or send flowers to the family in memory of Valentine V.T. Carr, please visit our flower store.