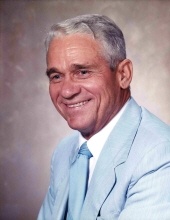 Abingdon, VA – William Frederick Corbett, age 96, passed away peacefully on Sunday, September 18, 2022, at Commonwealth Senior Living. Mr. Corbett was born on January 13, 1926 in Selma, NC and spent nearly 80 years of his life in Newport News, VA. He was a graduate of Newport News High School and retired from Newport News Shipyard & Drydock after many years of employment.

Mr. Corbett was a veteran of the U.S. Army Air Force where he served as sergeant and gunner on the B-29 Super Fortress during WWII. He fervently loved the Lord, his family, and his country, and he was an avid golfer. In 2011, Mr. Corbett relocated to Abingdon to be with his family and became a member of Abingdon Bible Church.

Funeral services will be held at 2:00 p.m. Thursday, September 22, 2022, in the Forest Hills Chapel of Farris Funeral Service, 19415 Lee Highway, with Pastor Jason Bakker officiating. Interment will follow in Forest Hills Memory Gardens with military rites conducted by Highlands Veterans Honor Guard and the Virginia Army National Guard. Visitation with the family will be held one hour prior to the service.

Those wishing to express sympathy online may do so by visiting www.farrisfuneralservice.com and signing the online guest register. The family of William Frederick Corbett is being cared for by Farris Cremation and Funeral Center, 19415 Lee Highway, Abingdon, VA 24210, (276) 623-2700.

To order memorial trees or send flowers to the family in memory of William Frederick Corbett, please visit our flower store.