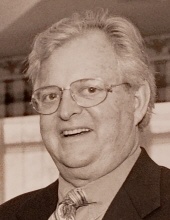 Abingdon, VA - William Hammond “PeeWee” Hunt died peacefully on April 26, 2022, surrounded by family and friends. Hunt graduated from the University of Virginia, McIntire School of Business in June of 1957, and was commissioned Ensign on that same date through the NROTC program. Hunt later served two years in the U.S. Navy, achieving the rank of LT (JG) and serving as Officer of the Deck on CVA- 61 USS Ranger aircraft carrier.

Prior to attending UVA, Hunt graduated from Saint Christopher’s High School, Richmond, VA in May of 1953, where he was co-captain of the varsity basketball team and given the name “PeeWee” as a point guard for his flair in directing traffic to the hoop, a skill which he carried well into his business career.

Hunt had a varied and successful professional career, which included leadership positions as Sales Manager and V.P. of Riverton Lime and Stone Company, Riverton, VA; Executive V.P. of Titmus Optical Company, Petersburg, VA; General Manager and V.P. of Jensen Division of The Muter Company, Chicago, IL; as well as Managing Director of Virginia Real Estate Investment Trust, Richmond, VA ; His career culminated by establishing Hunt Assisted Living in the late 70s, alongside sister company, Hunt Elderly Housing, both located in Abingdon, VA, for which he served as President and Chairman of the Board for 44 years.

The Hunt companies thrived and went on to own, develop, build, and manage many other assisted living communities, including free-standing Alzheimer’s communities and independent elderly housing communities throughout Virginia, North Carolina, South Carolina and Tennessee. Hunt was also a founding member, Board Member, and Leadership Council member of the Assisted Living Foundation of America (ALFA), the premier national trade organization for the assisted living industry. Hunt was also a lifetime member of the National Rifle Association as well as an active and engaged member of the Republican Party of Washington County, Virginia. He was an avid and generous benefactor to many worthy local and national charitable causes.

Visitation will be held at the Main Street Chapel of Farris Funeral Service in Abingdon, VA on Friday, April 29, 2022. The family will receive friends beginning at 6:15 pm, with a funeral service to follow at the same location beginning at 7:30 p.m. A graveside service will occur on Saturday, April 30, 2022, at 11:00 a.m. in Knollkreg Memorial Park. Friends and family are asked to meet at Farris Funeral Home by 10:30 am for procession to the graveside.

In lieu of flowers, the family requests that donations be made in Hunt’s honor to United Way of Southwest Virginia, 1096 Old Berry Rd, Abingdon, VA 21210. Those wishing to express sympathy online may do so by visiting www.farrisfuneralservice.com and signing the online guest book.

To order memorial trees or send flowers to the family in memory of William Hammond Hunt, please visit our flower store.