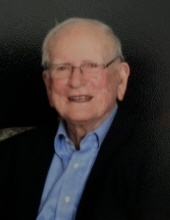 William Houston “Bill” Ferguson, Jr., age 95, of Abingdon, Va., passed away on Thursday, August 26, 2021, at English Meadows Abingdon Campus.  He was born August 20, 1926, in Cleveland, Va. to the late William Houston Ferguson, Sr. and Sarah Elizabeth Purcell Ferguson.  He was 1943 graduate of Cleveland High School.  Bill volunteered for the United States Navy on his 18th birthday and subsequently served as an Aviation Medical Tech during World War II.

Following the War, he attended both Lincoln Memorial University and the University of Tennessee.  He began work in February of 1949 with the Appalachian Power Company and retired as a Power Engineer after 45 years of service.

He joined the Abingdon United Methodist Church in 1957 where he was active in various committees and served as Chairman of Pastor Parish Committee.

He was an avid sports fan who enjoyed basketball, baseball, golf, and most notably Virginia Tech Football.  Bill was a member of the Hokie Club.

In addition to his parents, Bill was also preceded in death by his wife of 59 years, Sylvia Nye Ferguson; brother, Robert Ford Ferguson; and three sisters, Mary Midgette, Myrtle Valley, and Margaret Osborne.

A memorial service will be held on Saturday, December 18, 2021, at 2:00 p.m. at Abingdon United Methodist Church with Rev. Glenn Patterson and Rev. Paul Seay officiating. Military honors will be held provided by the United States Navy and the Highlands Veterans Honor Guard. A reception will follow the service in the church fellowship hall. A private committal service will be held at Knollkreg Memorial Park.

In lieu of flowers, memorial contributions may be made to the Abingdon United Methodist Church Landscape Fund, 101 E. Main Street, Abingdon, Va. 24210.

The family would like to express their appreciation to the staff of English Meadows and Caris Hospice.

Those wishing to express sympathy online may do so by visiting www.farrisfuneralservice.com and signing the online guestbook.  The family of William Houston “Bill” Ferguson, Jr. is being cared for by Farris Funeral Service and Crematory, 427 E. Main St., Abingdon, Va. 24210 (276-623-2700).
To order memorial trees or send flowers to the family in memory of William Houston "Bill" Ferguson, Jr., please visit our flower store.