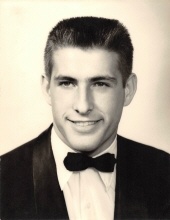 William T. “Chick” Wagner, age 77, of Glade Spring, Va., passed away on Monday, July 6, 2020, at Bristol Regional Medical Center.  He was born May 9, 1943, to the late Preston Wagner and Francis Able Wagner.  He graduated from the Abingdon High School Class of 1961 as an MVP on the football team and recipient of the Danny Counts Trophy.  Chick attended Emory and Henry College where he played football and went undefeated in 1961.

He retired from the Mink Company after 32 years of service.  Chick also spent 38 years with the Abingdon Fire Department and served as president of the State Fire Association.  He was a former member of the Abingdon Jaycees.  He served as the WBBI Voice of the Falcons, announced Abingdon High School Football and Baseball games, and was a Southwest Virginia football official. Chick mentored kids in athletics. He coached Senior League, Little League and Minor League Baseball Teams and Midget Football. Chick remained active in athletics, as he coached and played for the Western Steer Softball Team for a number of years. Chick was a member of Greendale Chapel Church, and at the time of his passing, worked as a Family Service Counselor at Forest Hills Memory Gardens.

In addition to his parents, Chick was also preceded in death by his sister Eleanor Romnosky; brother-in-law Jimmy Mink; and sister-in-law Nancy Mink.

Flowers will be accepted; however, memorial contributions are suggested to Shriners Hospital For Children, 2900 Rocky Point Drive, Tampa, FL 33607 or donate.lovetotherescue.org.

Those wishing to share memories, express sympathy, and send “Hugs from Home” may do so by visiting www.farrisfuneralservice.com.