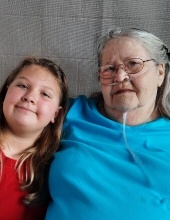 Yulanda O. Coe, age 73, of Meadowview, Va., passed away on Wednesday, September 1, 2021. She was a loving and supportive mother who adored her family; she will be greatly missed. The family would like to extend special thanks to the Caregivers at Gregory's Assisted Living Facility and Dr. Mark Handy for their devoted care.

Yulanda is preceded in death by her parents, Violet and Lewis Walden, Sr.; her husband of 54 years, Donald Coe; her brother, Lewis Walden, Jr.; and her granddaughter, Shaina Tiffany Berry.

Those wishing to share memories or to give condolences online may do so by signing the online guestbook. The family of Yulanda O. Coe is being cared for by Farris Funeral Service, 427 East Main Street, Abingdon, VA 24210. (276)623-2700
To order memorial trees or send flowers to the family in memory of Yulanda O. Coe, please visit our flower store.